Any old problem seems to be stressful for me lately.  Some care receivers eat all the time, but not my husband. With his mixed dementia he has lost weight and doesn't always eat much. It is also hard to get enough liquids down him which he needs because of UTI possibilities.


Hubby likes to eat on a tray at his Archie Bunker spot in the den while watching TV. He is so at home there that I hesitate to change the routine. He will sit at the table when we have others eating with us. Pictured  is a mix of nuts, dried cranberries and dark chocolate chips in a red bowl. Food a red plate is supposed to work. They say 25% more will be consumed HERE if the it is on red a red plate or in a red bowl.  The red in that bottle comes from 1/3 diet cranberry juice mixed with diet Lipton ice tea and the cranberry juice helps him not get another UTI. He really likes this drink and it is red! I also try to give him bottled water because we have well water that doesn't taste so good.

Between Kenny and I we always see that he gets his morning pills. Sometimes I text Kenny that he hasn't had his morning pills and Kenny takes care of that for me. I am responsible for his evening pills. Kenny also gives him two pills at lunch.

We have gone through different kinds of lunches since hubby was diagnosed with mixed dementia. Kenny suggested a variety of frozen dinners with foods he likes for lunch. Hubby also has coconut oil chocolate for lunch. This lunch is working now and when I work it is easy for Kenny to fix while I work.

One solution is out-and-out bribery. Your ice cream is ready after you eat a little more. Many care givers use ice cream I have read. I hear that a nutritious ice cream will be here soon.

Hubby likes to eat with someone such as myself at dinner and he seems to eat more when we go out to eat. We usually bring some of that dinner home and it doesn't taste as good to him with the warm up. Tonight I am warming up his dinner for the second time. He won't remember that he had it last night.

Hubby likes salads and can eat the salad and be too full for the dinner, but then wants his ice cream. So salad and ice cream!

I do the best I can. Sometimes I hear his stomach growl in the early morning hours. I want to get up out of bed and get his false teeth and feed him, but he prefers to sleep.

It is always something with dementia care receivers, and every one is different. Trying to tackle one problem at a time here, folks.

Tripped Up by Nouns; Another UTI

If you don't know what a noun is, see this link HERE. Or just click on here because it is fun.

I read that the nouns are the first to go with Alzheimer's patients. Now my husband's nouns, or names for things, are leaving his vocabulary. For example, when he was not walking, he asked me to write "urinal" on that thing he called a "pee jar". When I ask him to put his seat belt on in the car, it pushes the door button down. He doesn't understand the word underpants.

Tuesday he didn't understand get in the car in the garage. I came in the front door from turning off a light on the front porch and he thought that garage was out the front door. He lost his balance and fell on his right side--the side with that knee he had been having trouble with. He was tripped up by the noun "garage". He said he was fine. He sat Indian fashion on the rug. I told hubby to just sit and I would go get help to get him up from the carpet.

Tuesday is the day the husbands go to the Senior Center and I took a turn to take Jake and hubby to the Senior Center so that Sally could get to her appointments.  I went to get Jake at his house, a mile and a half away. Back at our house DH would not let me help him get up--Jake was ok. I called Kenny and he came over and Kenny and Jake got hubby up just in time for his 9:30 chiropractic appointment. Dr. R. said that I got him here in time to help with that problem knee. He is able to walk. But more is going on.

We happened to be at the chiropractor's office for quite some time after Dr. R. gave hubby his treatment. Kenny doesn't give hubby his pills on Tuesdays and in order to get to the appointment in time, we took the pills with us.   It was patient appreciation week and they had fruit, rolls, coffee, etc. Jake and I waited and waited in the chiropractor's office for hubby to take his pills.  Finally Donna in the office there came over and coached hubby in taking his pills and we were able to leave at 11:15. I dropped Jake and hubby off at the Plant City Senior Center, hubby going in with his walker.

Sally and I went to our monthly Tuesday Alzheimer's Association support group at First Baptist at 2 pm and then we both picked up our husbands at about 3:30.

When we got home, hubby was walking fairly well thanks to the chiropractor. However,  I knew we were in trouble. Hubby headed for the bedroom and laid down. I gave hubby his coconut oil chocolate in bed and it took until 7 pm for me to coax hubby into coming to the family room for his dinner. I think that coconut oil helped revive him. We have been fighting some infections recently. I had an upper respiratory infection a month ago and hubby had bronchitis. But with antibiotics we were both over those illnesses. Kenny suspected a UTI on Saturday and Tuesday with all the behavior I also suspected another UTI, as hubby was not drinking enough liquid lately and he was not himself. Yesterday's stubbornness was one precursor of the UTI. Confusion also is an indication, although you don't know if it is just an Alzheimer's patient continuing to go down hill. He started to put his underpants over his head yesterday morning, obviously confused.

I was able at 4 am this morning to have hubby pee in his pee jar or urinal. I put a UTI test strip into that pee and it registered positive. I canceled my substitute job for the day so we could go to the doctor for medicine. I put that pee jar into the refrigerator to bring to the doctor. Kenny was on his volunteer duty and he came over to take meds with hubby.

The test strips and the pee jar certainly helped. The doctor's office will test the pee, but in the meanwhile did give him that same prescription he had last time. Will report back to you how he does.
Posted by Carol Noren Johnson at 7:49 PM 8 comments

CONFESSION: Off My Niceness Treadmill 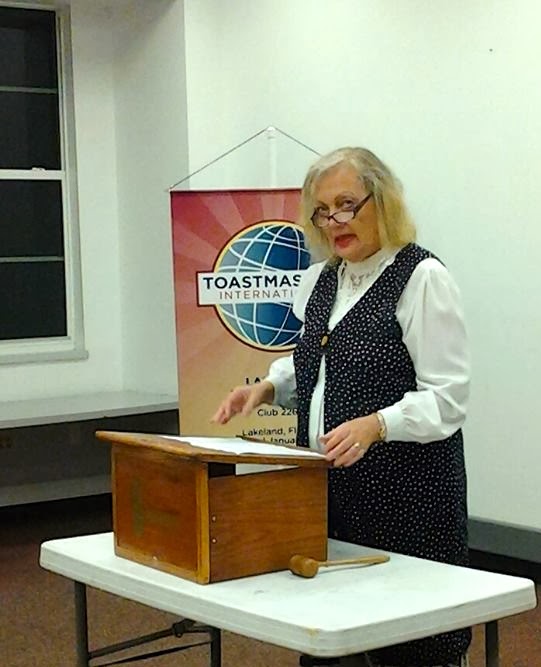 It is time I confess my stress and sinful anger at my husband Monday night. I was off the niceness treadmill that night in a sinful way, not in a logical, calm way as I wrote about in my book, Getting Off the Niceness Treadmill. I was yelling at my husband big time.

Basically hubby was supposed to stay home while I went to Toastmasters.  I had the responsibility of running the meeting--I signed up for the Toastmaster assignment on Sunday when I noticed no one had picked up that key job. We had agreed on hubby staying home, I thought, and Kenny would make his dinner and check in on him while I was at Toastmasters.  Hubby remembered none of this agreement Monday night.

Two facts about dementia loved ones such as my husband:
1. Short-term memory. Despite the fact that "Toastmasters" was typed on my side of the daily schedule, hubby denied that he wasn't going to Toastmasters.
2. Dementia husbands like their home and if the wife is not home, they want to be with her wherever she goes.

One fact about a Toastmaster meeting: Someone needs to be the Toastmaster each meeting and introduce everyone.

All the details had to come together but everything was last minute. Monday people had to sign up for jobs for the agenda and I had to make the agenda when I came home from substitute teaching in public school and that wasn’t as easy as I thought. Volunteer caregiver Kenny came over to make Herb’s dinner and I couldn’t chit chat with him. But neighbor Kenny could understand I couldn’t chit chat. He saw my tension and left the dinner for hubby.

You are trying to keep me home! hubby screamed. I was leaving, Kenny had left and by golly hubby was going to go with me to Toastmasters! Hubby hadn’t shaved. He hadn’t eaten his supper. He wanted to go at the last minute on my last nerves.  I hurried hubby along—very unpleasant for both of us. Uncharacteristically I started barking orders at him to get him ready. There was very little time. We argued as I drove us to Lakeland.

I apologized to hubby when we got home from Toastmasters and he had forgotten all about our argument before Toastmasters. He didn't want his dinner which was left for him and I threw it away rather than heat it up. I made each of us a bowl of ice cream and sat with him to eat it.

Lesson: Alzheimer's is a  S L O W disease
and the world has to slow down for it.
Posted by Carol Noren Johnson at 6:48 AM 6 comments