My Turn to Give Respite 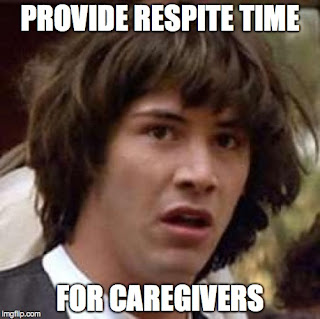 I had respite when my husband was alive as I shared on this blog. Often I had to ask for help--but not always. Once my sister-in-law took me on a cruise while my late husband went to stay with his son. Near the end of his life, my husband could not go to church and I had someone stay at the house so I could go to worship.

Caregiving is often a 24/7 job. I found this with my new friend in Huntsville, Sally. Several years ago Sally's mother Evelyn came to live with Sally and Bob, and gradually this 99 year old mother developed dementia (as we all may should we live that long).

Sally and her husband Bob need to be with her mother Evelyn constantly. Evelyn can't hear well and has glaucoma and macular degeneration.. She walks with a cane because of her hip and at her advanced age, a hip replacement is out of the question.  In addition, as can be expected, she has developed dementia, but doesn't know it. 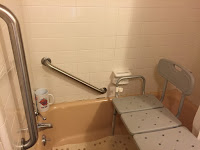 Recently I went to Sally's house to meet her lovely mother Evelyn. Sally showed me the tub where her mother gets an aided bath with a home health care aid that Sally hires. I was impressed at how this bath routine worked and didn't know about the long shower chair. Evelyn uses Depends on her own, and is able to dress herself with the clothes that Sally puts out.

When Evelyn is in bed and needs help, she can press a button Bob Bob installed on her bed. The button rings a wireless doorbell out in the hall that can be heard through the whole house. Bob or Sally can then go and help her. 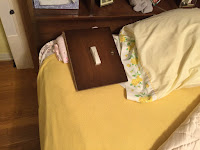 How do you test for dementia? The doctor can ask the care receiver as happened with my husband in 2008, or the caregiver can answer questions about their loved one.

But the test for Sally was not needed. She was stressed to the max. She needed respite. I contacted her pastor and others at her church about help for her. The wheels were put in motion. Sally also started brainstorming about people who could help including a young person she could hire. Aging Care has suggestions also HERE.

Meanwhile I provided respite on Sunday, November 15. It was my time to help. I did not go to my Huntsville church but would have my church with Evelyn (hymns and prayer).  Sally and Bob could get out to their church together --Sunday School, worship and out to lunch.  This retired couple deserved this respite and a date together. Sally had it all arranged--the usual breakfast was set out for her mother and a delicious ham was warming in the oven. They left for church about 9 am.

Evelyn came out all dressed and chipper. I reminded her that I am her new friend Carol. She had buried one husband and I told her I had buried two husbands. She quipped:


You are pretty hard of husbands
aren't you!

She also said that her hip was bad, but she needed to keep it because it was attached to the rest of her body. Delightful lady! She said she couldn't hear well or see well.

After lunch of corn, ham, squash and a banana, she occupied herself with a large Word Search puzzle, taking great pride in what she was doing. We did not watch TV, but I enjoyed maintaining the fire which we both watched. 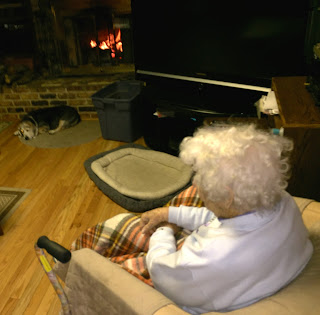 About 2 pm Sally and Bob returned and Evelyn showed Bob her progress on the puzzle. 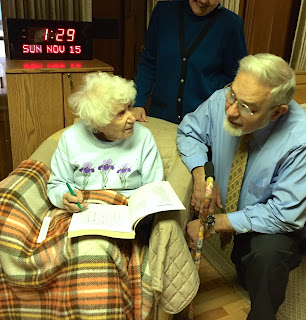 But there is more to the story and Sally was brave enough to tell me that Sunday--something I hadn't noticed. 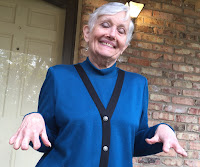 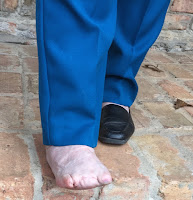 I had had Sally over to my apartment last summer with some of her friends that had been praying for me in my caregiving journey. I didn't notice her hands. I didn't notice her hands at the Alzheimer's Association Conference recently which her husband insisted she attend while he watched his mother-in-law. That day, I had just noticed her tears and the stress she feels being an 24/7 caregiver at the time in her life when she and Bob should be enjoying their retirement. She had characteristically bent her elbows and folded her hands in front of her like a speaker would do. Remarkable woman and remarkable smile.


In 2001 Bob and Sally had planned a trip to Maui, Hawaii in conjunction with a test connected with Bob’s work.  Bob was delayed at a test at White Sands so Sally went on ahead alone to wait.  She became sick and eventually went into septic shock.  She went to a "doc in the box" who treated her for nausea when she asked for antibiotics.  The next day he said he couldn’t help her and called an ambulance to take to the hospital emergency room as she could no longer drive.  Bob only found out when he was paged in the LA airport and told he needed to get to the hospital as soon as possible. The first three days they could not tell Bob whether she was going to survive or not.  The actual message was, “She is hanging over a cliff and we are reaching for her but we don’t have a hold yet.” She was in the hospital for five weeks with nineteen days in the ICU.  Septic shock causes the capillaries to shut down.  That affects the lungs and extremities the most.  She was put on 100% oxygen to keep her alive which is not a good thing for long periods of time because it turns the lungs to “leather” and will eventually kill you.   While she eventually began to improve, her fingers and toes turned black. She had to have all her fingers beyond the first knuckle surgically removed except for thumbs which she begged to keep. All but her little toes also had to be removed.

Bob got a medical leave from work to stay with her, and her mother and sister also came out to stay with her.  However, the last week Bob had to leave to attend their son’s wedding so Sally’s secretary and her secretary’s daughter, Beth, came out to stay with her.  On September 10, 2001 they took Sally directly from the hospital to the plane to return to Huntsville.  They landed in LA the morning of 9/11 and all flights were grounded.  Beth, not being a shy person, pushed her way to the head of the long car rental line and said she needed a van for a medical emergency.  For the next three days they drove straight from LA to Huntsville.  At every stop Beth would drag out a suitcase to put on the ground beside the van for Sally to step down on.  That trip served as Sally’s in residence PT!

Met a speaker, Chanda Mills Crutcher, founder of American Senior Assistance Program, who really had common sense about seniors and caregiving. Her friend had wanted us to meet and we did! She even had me rap at the end of her talk. 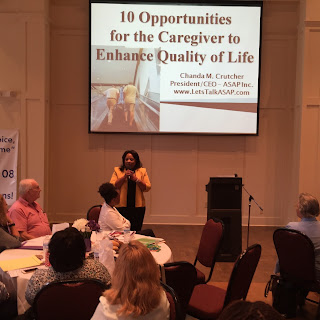 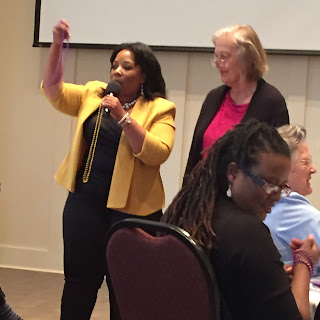 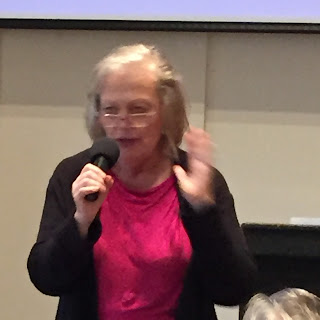 I did my rap about helping seniors. Oh my goodness! They were recording me in the audience! Bad hair day as usual! They just needed to see this on YouTube where it is called "Technology" by my producers.

Also talked with Sally who is the 24/7 caregiver for her mom. She was on the verge of tears. I emailed several in her church who might be able to help.

One excellent workshop was on Alzheimer's proofing the home by Jason Parks, Lead Pastor & Chief Executive Officer, Refuge Church. I wish I had had that workshop years  ago. If you have been following this blog you know that I went through "The House That Cleans Itself" several years ago and with each room I thought about safety for the home. Hope to get together with Jason for input on that dissertation.

This workshop was in The Cooper House auditorium -- a facility owned by the church I attend.

Back to writing my caregiving dissertation while seeing that Sally gets respite from her church.

Posted by Carol Noren Johnson at 7:25 AM 7 comments