My friend Connie and her dog Donner accompanied my dog Ziggy and me on an Alzheimer's Association Walk last month. We received scarves for our dogs there and Ziggy proudly wore his scarf on the walk. Donner's neck was too small for him to wear his, but Connie took that scarf home.

Now Connie and her husband Gary had two other dogs given to them recently--Brody and Midnight.  It was doggie chaos when I visited them! Brody kept running away, jumping over the fence in their back yard and the last time Brody ran away he was wearing an Alzheimer's Association scarf.

With surgery coming up for both Connie and Gary, they knew that they could keep only their original small calm dog Donner--not the two other dogs which caused so much havoc in the home.

Neither Connie nor Gary were currently driving and so I took my friend Connie and Midnight to Huntsville Animal Services. I made the case for their taking Midnight, and incidentally mentioned that there was another dog named Brody who had run away from their property. They were happy to take Midnight, although it made Connie tearful to give him up.

The next day I got an email from an Alzheimer's Association office here in Alabama.

What a coincidence! The two robust dog buddies were there! I let the Alzheimer's Association know that Brody was not my dog, but I did know about him. I drove to Connie and Gary's house and got Brody's paper work. When I brought that paperwork to Huntsville Animal Services, I found out the good news that Brody had been adopted and that most likely Midnight, not yet one years of age, would be also.

So this is the story of how that Alzheimer's Association walk led to both dogs being adopted.
Posted by Carol Noren Johnson at 4:04 AM 4 comments

We celebrated after church on Sunday at Grandmother's House Restaurant. 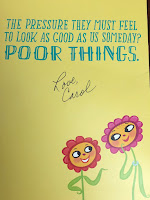 She has a great sense of humor. The birthday card I got her says that all our friends are jealous of how we look at our ages; that card opens and you hear music--perfect for her good hearing. She laughs at this.  Together we get along.  I tell her I don't hear well (I have hearing aids) and she doesn't see well. We make one person. We have both buried two husbands and have learned a lot about each other.

She is a proper lady. She regularly gets out with a driver for her car. She goes to a church Bible study and Sunday services. She gets her hair and nails done.  December of 2015 when I first moved to Huntsville, we went to the Living Christmas Tree at First Baptist. She stood for the Hallelujah Chorus pulling herself up with the bench in front of her.

Through her I have learned to love old hymns and value taking time to pray for one another. We adopted each other.

* How would the LORD get me to my church's prayer meeting? I broke my two feet and ended up there for three weeks (what my insurance covered).  Now I keep going.

Posted by Carol Noren Johnson at 7:21 AM 5 comments